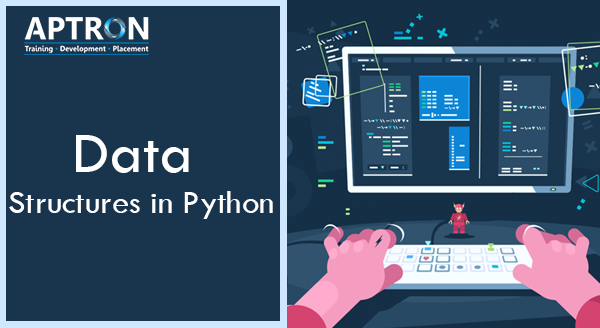 Python has the ability to create varied types of applications such as desktop, web, Artificial Intelligence, Data Science and much more. The creation of such applications is possible only through the usage of data. Timely access to the inefficiently stored data Data plays a significant role through the technique called Data Structures.

What is Data Structure in Python?

Data structure refers to the process of manipulating the data. This manipulation process is inclusive of managing, organizing and storing the data in several ways. It is quite easier to obtain and modify the data. The data structure permits the storage of data, its modification and also allows to compare the data to others. It also allows to carry out some operations based upon the data.

Data Structures in python are of the following types:

In general, all the programming languages allow programming for these data structures. However, Python also comprises of certain in-built operations to do so. Data structures in Python have been typically divided into two types which are as follows:

The above listed four data structure types are referred to as built-in data structures in Python. These data types are inculcated with predefined methods for manipulation of data such as accessing, storing as well as related operations.

The collection of elements with duplicates is referred to as the list and is also known as ordered collection because it returns the elements in the same order as it has been inserted. The list follows the index-based storage to get the elements arranged in order and these aren’t supposed to be necessarily homogeneous i.e. storage of similar kinds of values. However, one can also store varied types of elements. These can be muted allowing us to manipulate the elements such as removing, adding and changing the values.

The list can be created by making use of the square brackets as well as the list constructor. Since the list is mutable, therefore it can also be empty however, one can add the elements later.

You can make use of the following methods to add the elements:

Following method is used for deleting the elements in the list:

The elements in the list are accessed on the basis of index value. Apart from this we also make use of some of the slicing concepts for accessing the values in the list.

In addition to the above methods list uses the following methods for the processing of some of the operations:

Adding and Changing the Elements:

Just like the index in the list, to carry out the operations, the dictionary always makes use of the key. In order to add the elements within the dictionary, you may make use of the key-value pair. Your wish to change or override the value also depends on key only.

m_dict1[‘b’]=”bee” # changing the value of the element using key

The following methods are used for deleting the elements within the dictionary.

In order to access the elements of the dictionary is done by using keys just like the index in the list and additionally, we may also use the method called get(). In order to receive the element value just pass the key as the parameter.

In addition to the manipulation methods listed above, the following are various other methods in the dictionary:

A tuple refers to the immutable collection of elements i.e. once the elements enter the tuples they can’t be changed otherwise it would just look like a list in python.

Tuple can be created by making use of a tuple constructor or parenthesis.

In order to add the elements to a tuple, the symbol + is used. It just helps in the concatenation of the tuples of values.

Tuple do not allow any manipulation method as it is considered to be an immutable collection of values. Thus, it uses only the following methods-

Sets in Python refer to the unordered collection of the elements and do not allow duplicates i.e. if one tries to insert the same element more than once, it won’t accept i.e. it takes that particular element only once. This specific set of operations are similar to the arithmetic sets in mathematics.

Sets in python can be created by using curly or flower braces. It contains unique values as it doesn’t allow duplicates.

Use add() method to add the elements in the sets.

Other Operations in Sets

The following are the various operation methods of the sets.

Followed by virtual memory, the stack is a basic data structure concept and is a linear data structure type. In the order of Last In First Out process i.e. LIFO, it is followed to manipulate data. For the purpose of storing and retrieving the variables, the programming language memory managements would follow this data structure type. The stack comprising of few of the manipulation processes such as the addition of the elements called as pushing, removal of the elements known as popping and also access the elements. That is known as a TOP element which makes use of the cursor to point out the TOP element i.e. the current element in the stack. This cursor moves one by one, once you pop the elements. Stack mostly makes use of the recursive process and reverses the process.

Similar to the stack, Queue is also a linear data structure type that follows the process of First In First Out i.e. FIFO. Unlike the stack, the case is opposite here, i.e. the element that has been inserted first will be popped out first whereas, in the stack as per LIFO, the last inserted element will pope out first. The queue is created with the help of an array of elements as well as operations that are done at both the ends of the queue such as head-tail or front-back of the process. We possess two kinds of a queue here i.e. en-queue and deque. These two queues are used depending on the operations like adding and removing elements. The queue is majorly used in OS for scheduling of jobs and it is also used in network buffer management in case of traffic congestion and more.

A tree in python is referred to as a kind of non-linear data structure. It helps in the storage of the elements within a tree structure such as parent and child node process and also follows the root as well as nodes. The root will be the beginning element and nodes would be the other data stored points. A tree comprising of different levels symbolizes the depth of the information. The last node is also known as leaves. A tree finds its use for efficiency in searching and much more. It is also used for the creation of the website by making use of HTML in order to identify the enclosed tags.

The linked list falls under the linear data structure type and it stores the elements based on the nodes. Every node comprises of the data as well as the address for the next node. The data present in the linked list has not been stored inconsequently. This kind of data structure is mostly used in music player applications as well as image view applications. These are also of different types like doubly, circular.

Graphs represent the data stored in the collection with vertices (i.e. nodes ) as well as edges. These graphs hold advantage in order to show the data accuracy in real-world maps. These graphs are generally used to find the least path i.e cost-to-distance amongst the data points also known as nodes. It is mostly utilized in map-related applications such as ola, uber, google maps to find the shortest distance for better performance.

If you wish to gain expertise in the skills of Python programming techniques then opt for APTRON’S Python Training in Noida. The institute applies a unique training methodology and Python course content is designed as per the industry recommendations. This, in turn, prepares the students as per the industry standards. The Python training in Noida at APTRON involves more of the practical sessions while training the students on real-time Python projects for them to get the best knowledge of the subject. Industry expert corporate Python professionals conduct the classes for the Python course in Noida at APTRON. Extensive infrastructure with highly advanced and high-tech lab facilities gives the students an excellent learning environment. Also, the duration for the Python training in Noida at APTRON class is flexible with batches running both in the daytime and evening during weekends and weekdays and also fast-track Python course in Noida are available here. APTRON is the best Python training institute in Noida as the training here is accompanied by 100% placement assistance to each attendee.