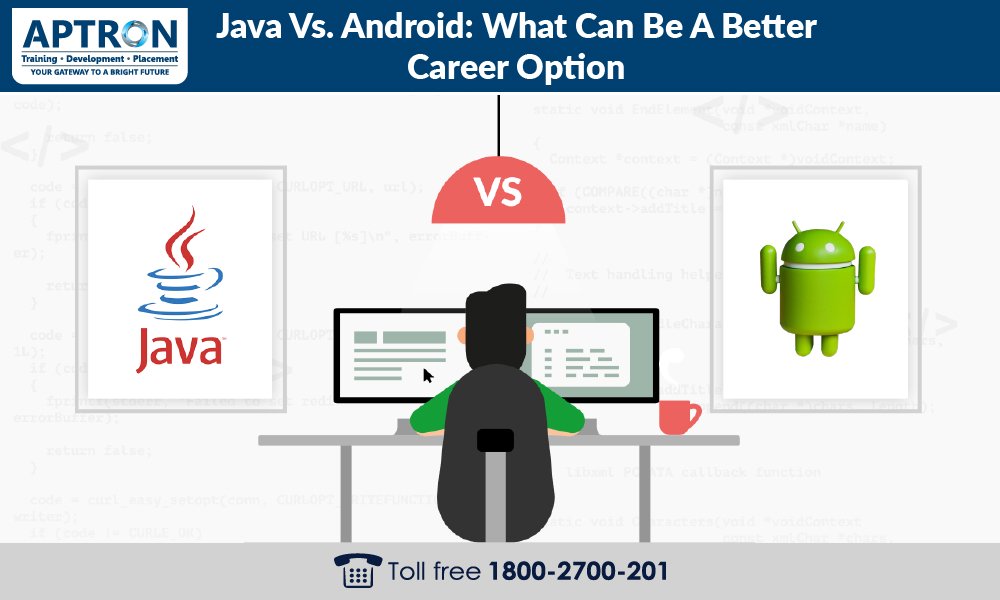 We understand how important it is to efficiently develop the skills in order to have a successful career ahead. It is really difficult at times to decide what would be better in terms of career prospects? Java or Android? Well in this era where technology is growing rapidly both Android and Java have their own significance. But in order to help you out to take the easy decision, we have discussed the core importance, scope and benefits of each of these and this will help you out to choose the one that suits your career expectations. Therefore you can further opt for Java training or Android Training.

On one side Java is considerably the gateway to several career opportunities, whereas Android on the other side is emerging as the most efficient technology and it is also a source of passive income i.e. an addition to your regular job. If you truly aspire to be a java developer or an Android developer, it can lead you to a promising future. The Java Vs. Android debate has been long into a discussion, although it is quite difficult to clearly say that which would be a more beneficial one, let us have a look at its benefits and scope individually.

Java is one of the core programming languages with the utmost importance and will never fade out. Java finds its existence in everywhere due to its outstanding scalability, stability as well as maintainability. Beginning right from running of the server-side applications to running systems and governing ATMs, Java is the driving factor to everything today. This makes Java training suitable for an exciting future.

Java Programming language is composed thoroughly in order to become the regulator of the Internet of Things i.e. IoT.

With a rich API, Java is an object-oriented language that embraces the best practice of objected oriented design and motivates you strongly to write cleaner code.

To speak of the superior coding, IDE i.e. Integrated Development Environment available for Java comprises of a source code editor that has been specifically designed to speed up and simplify the input of the source code.

Apart from all these, the most important thing to mention is that, if even if you wish to learn about Android App Development, Java comes out to be the major application development platform for Android. In other words, Android can be called as the subset of Java.

Java has introduced a new era for the IT sector. There are many outstanding products and services developed using Java that has enabled the transformation of the IT world. Java has its widespread impact on almost everything right from mobility i.e. android to the middleware i.e. Hadoop that has an exciting future.

The Java training makes you proficient in the skills that make you a valuable asset for the big corporates. One important factor to note about Java is that the rate of change in relation to the technologies is quite slow and this promotes stability to work for a longer duration.  Also, the Java jobs are considered to be more stable than that of android jobs.

If you aspire to work on an organization-based project, it is advisable to pursue Java training or if you wish to be a freelance developer in near future then you can go for the Android training.  Android holds a huge competition in both organization level projects as well as the freelance developing.

The average annual salary for a Java developer ranges from 4-6 lakhs and further depends upon the skills and expertise level of the individual. As per the survey, the average salary of jobs available for the Java developers is 77% greater than the other job profiles across the nation.

Now let us have a look at how can Android training be helpful for a successful career:

Built on Linux, Android is an open source mobile operating system and does not typically differ much from Java development in the regular environment. Thus Android development can be roughly referred to as the advanced version of the Java development.

Android is no more limited to mobile technology only and thus will stay longer than expected. Android has paved it way to other technologies too but at the same time it carries some uncertainty too about its existence i.e. anytime it can be replaced by a more robust platform. But, till the time it exists, it would remain as one of the major forces due to its ability to offer high-end functionality to the various devices that operate with the help of Android OS.

Learning Android app development is not at all difficult, all that is to be done is to get the best Android training from a recognized Android training institute. Its ease of usage, high memory, ability to edit, rich development environment, performance, the feature to support media files in various specified formats makes it quite easier to grasp.

Android applications scripted in Java by making use of the rich set of libraries. Hence, those who are familiar with the Java Programming language are benefitted over others while taking the Android development training. Apart from learning Android app development the Android training largely benefits the emerging entrepreneurs, helping them cut down the overhead costs by encouraging them to make their own apps.

Most of the MNCs, the startups and others have flourished their Android-based products in the market and this trend is likely to continue in the near future too. Due to this widespread popularity, usage and trend to introduce a new app frequently have led to the availability of a large number of jobs. Once you acquire the professional skills after the completion of Android certification training course you can choose to work as a freelancer or you can also work the full time.

Due to its dynamic revenue model, android significantly offers better job prospects and a promising career. The international data corporation states about the shipment of more than 80% devices powered by Android that in turn makes it the most dominant platform. Thus, opting for Android training can give you fruitful results in terms of career.

The average annual salary for the Android developer varies from 3-5 lakhs and further relies upon the expertise and skills of the individual. As per the survey, the average salary of android developers shows a steady growth as compared to that of job profiles.

APTRON is the best training institute in Noida that offers practical oriented professional Java training in Noida as well as the Android training in Noida. The Java/android course fees her is quite affordable and the training is provided under the mentorship of industry experts in an excellent learning environment. The institute has a well-equipped infrastructure and majorly focuses on practical aspects of the training with the help of live projects.