Over thousands of vacancies available for the Python developers, experts must be acquaintance with all the component of Python technologies. This is necessary for the students in order to have in-depth knowledge of the subject so that they can have best employment opportunities in the future. Knowing every little detail about Python is the best approach to solve the problems linked with the problem.

First of all, let us tell you about how the Python technology is evolving in today’s world and how demanding it is in the upcoming years. In fact, according to one study, most of the companies and businesses have moved to the Python. Now, you cannot predict how huge the future is going to be for the people experienced in the related technologies.

Hence, if you are looking for boosting up your profile and securing your future, Python will help you in reaching the zenith of your career. Apart from this, you would also have a lot of opportunities as a fresher.

These questions alone are omnipotent. Read and re-read the questions and their solutions to get accustomed to what you will be asked in the interview. These Python interview questions and answers will also help you on your way to mastering the skills and will take you to the giant world where worldwide and local businesses, huge or medium, are picking up the best and quality Python professionals.

These are very Basic Python Interview Questions and Answers for freshers and experienced both.

Q2: What is the difference between deep and shallow copy?
A2: Shallow copy is used when a new instance type gets created and it keeps the values that are copied in the new instance. Shallow copy is used to copy the reference pointers just like it copies the values. These references point to the original objects and the changes made in any member of the class will also affect the original copy of it. Shallow copy allows faster execution of the program and it depends on the size of the data that is used.

Deep copy is used to store the values that are already copied. Deep copy doesn’t copy the reference pointers to the objects. It makes the reference to an object and the new object that is pointed by some other object gets stored. The changes made in the original copy won’t affect any other copy that uses the object. Deep copy makes execution of the program slower due to making certain copies for each object that is been called.

Q3: How is Multithreading achieved in Python?
A3:

Q4: How is memory managed in Python?
A4:

Q5: Explain what Flask is and its benefits?
A5: Flask is a web micro framework for Python based on “Werkzeug, Jinja2 and good intentions” BSD license. Werkzeug and Jinja2 are two of its dependencies. This means it will have little to no dependencies on external libraries.  It makes the framework light while there is little dependency to update and less security bugs.

A session basically allows you to remember information from one request to another. In a flask, a session uses a signed cookie so the user can look at the session contents and modify. The user can modify the session if only it has the secret key Flask.secret_key.

Q6: What is the usage of help() and dir() function in Python?
A6: Help() and dir() both functions are accessible from the Python interpreter and used for viewing a consolidated dump of built-in functions.

Q9: Is python a case-sensitive language?
A9: Yes! Python is a case sensitive programming language.

Q10: What are the supported data types in Python?
A10: Python has five standard data types −

Q11: What are Python’s dictionaries?
A11: Python’s dictionaries are kind of hash table type. They work like associative arrays or hashes found in Perl and consist of key-value pairs. A dictionary key can be almost any Python type, but are usually numbers or strings. Values, on the other hand, can be any arbitrary Python object.

Q14: What is PEP 8?
A14: PEP 8 is a coding convention, a set of recommendation, about how to write your Python code more readable.

Q15: How Python is interpreted?
A15: Python language is an interpreted language. Python program runs directly from the source code. It converts the source code that is written by the programmer into an intermediate language, which is again translated into machine language that has to be executed.

Q16: What are the tools that help to find bugs or perform the static analysis?
A16: PyChecker is a static analysis tool that detects the bugs in Python source code and warns about the style and complexity of the bug. Pylint is another tool that verifies whether the module meets the coding standard.

Q19: What is Dict and List comprehensions are?
A19: They are syntax constructions to ease the creation of a Dictionary or List based on existing iterable.

Q20: What is namespace in Python?
A20: In Python, every name introduced has a place where it lives and can be hooked for. This is known as namespace. It is like a box where a variable name is mapped to the object placed.  Whenever the variable is searched out, this box will be searched, to get corresponding object.

Q23: What is the purpose of a // operator?
A23: // Floor Division − The division of operands where the result is the quotient in which the digits after the decimal point are removed.

Q24: What is the purpose of not in operator?
A24: not in − Evaluates to true if it does not finds a variable in the specified sequence and false otherwise. x not in y, here not in results in a 1 if x is not a member of sequence y.

Q26: What is __init__.py used for?
A26:It declares that the given directory is a  package. #Python Docs (From Endophage‘s comment)

Q29: How are Phon blocks defined?
A29: By indents or tabs. This is different from most other languages which use symbols to define blocks. Indents in Python are significant.

Q31: What is the Encapsulation?
A31: The concept of binding or grouping related data members along with its related functionalities is known as a Encapsulation.

Q35: What Does The <Self> Keyword Do?
A35: The <self> keyword is a variable that holds the instance of an object. In almost, all the object-oriented languages, it is passed to the methods as hidden parameter.

Q36: What Are Different Methods To Copy An Object In Python?
A36: There are two ways to copy objects in Python.

Q37: What Are The Optional Statements That Can Be Used Inside A <Try-Except> Block In Python?
A37: There are two optional clauses you can use in the <try-except> block.

Q38: Python and multi-threading. Is it a good idea? List some ways to get some Python code to run in a parallel way.
A38: Python doesn’t allow multi-threading in the truest sense of the word. It has a multi-threading package but if you want to multi-thread to speed your code up, then it’s usually not a good idea to use it. Python has a construct called the Global Interpreter Lock (GIL). The GIL makes sure that only one of your ‘threads’ can execute at any one time. A thread acquires the GIL, does a little work, then passes the GIL onto the next thread. This happens very quickly so to the human eye it may seem like your threads are executing in parallel, but they are really just taking turns using the same CPU core. All this GIL passing adds overhead to execution. This means that if you want to make your code run faster then using the threading package often isn’t a good idea.

There are reasons to use Python’s threading package. If you want to run some things simultaneously, and efficiency is not a concern, then it’s totally fine and convenient. Or if you are running code that needs to wait for something (like some IO) then it could make a lot of sense. But the threading library won’t let you use extra CPU cores.

However, you will be asked with the questions in the interview related to the above mentioned questions. Preparing and understanding all the concept of Python technology will help you strengthen the other little information around the topic.

After preparing these interview questions, we recommend you to go for a mock interview before facing the real one. You can take the help of your friend or a Python expert to find the loop holes in your skills and knowledge. Moreover, this will also allow you in practicing and improving the communication skill which plays a vital role in getting placed and grabbing high salaries.

Remember, in the interview, the company or the business or you can say the examiner often checks your basic knowledge of the subject. If your basics is covered and strengthened, you can have the job of your dream. The industry experts understand that if the foundation of the student is already made up, it is easy for the company to educate the employ towards advance skills. If there are no basics, there is no meaning of having learnt the subject.

Therefore, it’s never too late to edge all the basics of any technology. If you think that you’ve not acquired the enough skills, you can join our upcoming batch of Python Training in Noida. We are one of the best institute for Python in noida which provide advance learning in the field of Python Course. We’ve highly qualified professionals working with us and promise top quality education to the students. 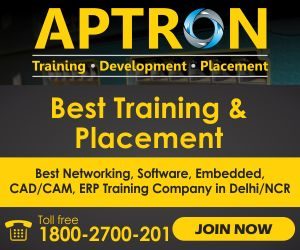 ABOUT US
Since 2003, APTRON Solutions has provided individual and corporate clients with a superior learning experience under the brand name of Netexperts Educational Services. As a trusted education partner we deliver more than 250+ IT and NON-IT training courses for 20+ vendors from such leading technology firms as Cisco, Microsoft, VMware, Oracle, SAP, CompTIA, Red Hat, Salesforce & Many More etc.
Contact us: info@aptronnoida.in
FOLLOW US
MORE STORIES
Interview Questions Answers